We need to talk to you about sex. Kids today are learning more information faster than ever before, so fast it’s scary. And without some good teaching on this subject they are in for a difficult time in their lives.

Watch this video of Dr. Turansky describing a conversation he had with his daughter and her boyfriend.

If you aren’t talking to your kids about sex then you’re the only one who isn’t. They’re hearing about it on TV, in music, at school, from friends, and through advertisements of every kind. But parents find this one of the most difficult subjects to address with their kids.

Here are some questions that will help guide your parenting decisions when it comes to sex education in your family.

How early do we start talking to our kids about sex?

Recognizing that children are at different stages of maturity, it’s important to discuss sex and related issues in a way that’s appropriate for a child’s age and development. Parents set an open atmosphere with their kids by talking even with preschoolers about differences between boys and girls, privacy, and God’s design for families. This open dialogue answers a child’s question only as far as they need to know but teaches kids that they can talk to their parents about these issues and that differences are part of God’s design.

As children move into the elementary years it’s good to talk more about biology and the growth of a baby inside of a mother and that God designed the process of pregnancy and birth.

By preadolescence it’s important to talk about intercourse, privacy, the biology of pregnancy, and the God-given gift of sex within the confines of a marriage relationship. It’s also important to talk to kids about how to relate to the opposite sex. Differences are fun but need to be handled carefully.

What are the areas we should talk about? Although the material you cover is partly determined by the child’s age and interest, here are some basic things you want to consider as you talk with your children.

First, use the correct anatomical terms for body parts. Second, talk about social relationships between boys and girls. You want to encourage healthy dialogue between guys and gals within limits. The reality is that girls and boys think and act differently and that makes for interesting interaction. That’s not only okay. It’s good.

However, sometimes the interaction turns into flirting and experimentation. Privacy, sexual jokes, teasing, and touching games are part of the social interaction you’ll want to discuss. Be careful about your own teasing in the area of relationships. Young people can become quite sensitive and self-conscious. You’ll want to be honoring and affirming as you talk about this sensitive subject.

Third, talk about values that influence sexual decisions and God’s design and plan for marriage, sex, and family. It’s important for children of all ages to realize that living within God’s guidelines for sexual purity produces the healthiest and strongest marriage relationships and avoids many emotional problems that come with sexual promiscuity.

What if my child has shown an early interest in sex?

Sometimes children touch themselves or experiment and explore with other children, exposing themselves to more information and experience than you’d like or that is helpful for them.

An increased exposure or interest in sex at an early age is important to address. Here are some guidelines. By all means, keep your fear and anger in check. You can do more damage to your relationship with your children by your intensity than by the experimentation itself. You want to set firm limits without making kids feel ashamed or guilty about their own sexual interests and desires.

Be firm in setting limits with kids regarding their involvement with other children. Kids need to know that sexual exploration is not acceptable. When children engage in sexual stimulation at a young age, work to distract them, keep them busy, and gently encourage them away from that activity.

Children who use privacy to explore sexuality need less alone time. Keep them in common areas and in places where you can keep an eye on them. Children who have a greater interest generally need more discussions and teaching about sexual issues.

Which parent should do the talking to our kids?

Some people believe that dads should talk to their sons and that mothers should talk to their daughters about sexual issues. It’s important, however, that both dads and moms have significant discussions with their kids. The reality is that men think differently than women. When a mom talks to her son about sex she’ll emphasize different things and have a different perspective on the subject than a dad will.

Likewise, when a dad talks to his daughter about sex he’ll approach it differently. Furthermore, when sexual issues become more important and correction is required you want to have both parents involved. Also, the reality in most families is that children often gravitate to one parent over the other as the parent they confide in. This isn’t wrong. It’s a reality. So, who does the talking may be determined by the unique family dynamic.

Should we talk to our children individually or together? The answer to the question is “both.” Open conversation about sex within the family dynamics includes group discussions about the social issues, and maybe even some conversations about pregnancy and birth. Certainly developing personal convictions in children requires individual conversations. The ages of the children in the family must be considered. You may discuss more with an older child in private so as not to expose younger children to more information than their development is ready for.

Open honest conversations in family life both individually and together require that a parent feel comfortable with the dialogue. This takes work but it’s worth it in the end.

What can I do to overcome my own issues of embarrassment with discussions about sex?

It’s important for parents to work hard to overcome embarrassment in this area. You can do several things to prepare yourself to adequately parent your children. First, talk to the Lord about your own sexual experiences. If you’ve sinned in this area, ask forgiveness and deal with it before God. Second, thank the Lord for your own sexuality. Acknowledge God in this important area of your life and you’ll experience tremendous relief from anxiety and embarrassment.

Imagine your unmarried daughter pregnant at 17 or your unmarried son fathering a child. You want to have done everything you can now to prevent that. Recognizing that your kids are in danger in our sex-crazed society will fuel your desire to overcome any personal issues and allow you to be proactive in this area with your kids.

Read the book How to Talk Confidently with Your Child about Sex. This book will give you practical ideas for addressing these issues with your children.

Get an age-appropriate book from our Learning About Sex curriculum. These books provide you with a resource, taking the focus off of you or your child and placing the focus on an informative book. At the National Center for Biblical Parenting we are committed to helping you be the most effective parent possible. We work with moms and dads every week and we know that parenting is the toughest job in the world.

You will get 10% Discount 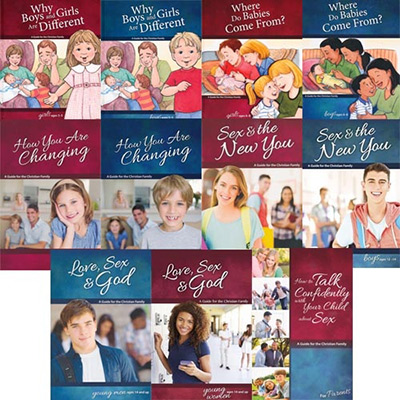 You will get 10% Discount